My second volunteering visit to Vauxhall City Farm arrived at the same time as ‘the beast from the east’ with London being hit by a dump of snow and temperature dropping well below zero. As a result of this, unfortunately some of the water pipes had frozen at the farm meaning no water was being supplied to the taps in use by the public. Hand-washing is required before and after interacting with the animals to stop the spread of germs between the animals also to people, meaning unfortunately the farm had to be closed to the public until the storm passed. 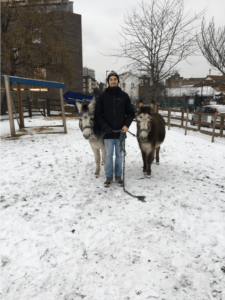 Nevertheless, even with no outside visitors the animals still need the same amount of attention! During storms and adverse weather most of the normal daily tasks such as cleaning stables and feeding are still done as usual, but there is additional care to allow the animals to spend as much or as little time exposed to the cold as they would like. My day consisted of making sure the smaller animals like chickens, rabbits and turkeys had enough food and extra straw so they are warm enough overnight. I was also lucky enough to coincide my visit with a big delivery of mulch from a local tree-lopper, meaning a good afternoon workout shovelling and wheeling the woodchips around the farm. This was spread around the animal enclosures to create an extra layer between the animals and the soil meaning it would not be so cold. My day ended by taking the donkeys for a walk to the paddock, where they weren’t put off by the snow at all – giddily running around and playing together.

It is a real testament to the staff and committed volunteers to see how much people enjoyed themselves during the day given the conditions with no complaints. While there is a large variety of people here, everyone comes together to help out because of a mutual love for animals.

#BCorpMonth Green Element is a proud and certified BCorp and to celebrate the fact that February is BCorp month we thought we’d write an article about why we’re proud to be a BCorp.     Emma, Alex and Nidhee share why they’re proud to work for a…

The Planet Mark™ event to shine spotlight on business and ‘Global Goals’ Green Element were lucky enough to be invited to this interesting and thought-provoking event at Linklaters on February 1st, coordinated by the Planet Mark and the Legal Sustainability…

Radio Interview with Radio Jackie on General Environmental Management http://news.radiojackie.com/ Radio Jackie interviewed Will Richardson about what businesses should and could do on minimising their environmental impact. Listen Below: [et_bloom_inline…