Inspiring next generations to nurture the environment

Regent’s University is London’s only independent, not-for-profit university, with a highly cosmopolitan community based in royal Regent’s Park and Marylebone.

The Environmental Management System maps out a framework that an organisation can follow, providing assurance that any environmental impact is being monitored and improved.

An EMS is divided into six phases:

It was discovered that gas consumption and spend had improbably increased between 2013-14 and 2014-15 due to a failing corrector on the main meter. In addition, the University had been wrongly charged the Climate change levy tax on its buildings. This has resulted in a saving of £65,000 which is a welcome financial boost in addition to the savings already achieved through efficiency and good environmental practices - Chart 2.

Power demand reduced by approximately 30 kW each day between 00:00 and 06:00 - Chart 3. The University has also attained the Energy Management System certification ISO 50001 and Environmental Action Plans have been developed for the majority of buildings and grounds, and working practices; these plans are measured against the targets set in line with rolling improvements.

Improvement targets are set year on year – ​Chart 4 illustrates the achievement in reductions in air travel, and the target for the next period to investigate whether business road travel has a significant environmental impact. 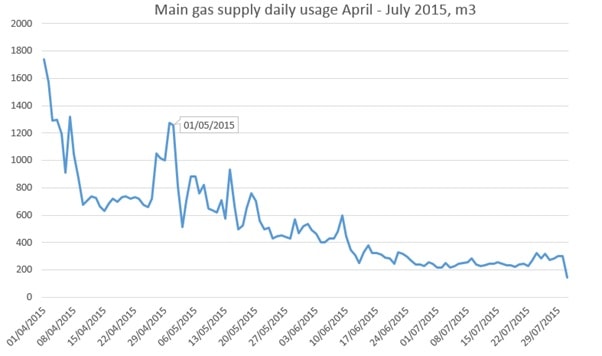 What our client think of us?

Regent’s University London have seen significant financial benefits, but beyond this have developed a more sustainable relationship with the environment through the interaction with their people and the estate. Sustainable food sourcing, apiaries on site, all contributes to nurturing relationships with the natural world, with contributions at all levels from directors to teachers, students to gardeners.

Work with us
This site uses cookies: Find out more.