adam&eveDDB is a worldwide communications agency based in London. They were aware of global environmental issues as long ago as 2005, and a group of like-minded tree-huggers set up a number of initiatives to reduce their impact on the climate: people were encouraged to turn out the lights, use less paper, recycle more waste and turn down the heating. The problem was how to get all the 500 employees interested and on board – after all they probably wouldn’t want to sit all day in a cold office with the lights turned off without their own personal waste bin. The solution was pretty original: they arranged a jumper sale in the bar and suggested that any savings achieved could be put towards organic fruit for breakfast. The next problem was, of course, convincing the guys in the finance department that certain sensible ‘housekeeping’ investments would pay for themselves surprisingly quickly and that there really were financial savings to be had as well as kudos in the corporate world for showing real responsibility towards a growing global problem.

From small beginnings greater things do grow (as the Adam & Eve story tells us), but the question was how to monitor progress effectively and properly evaluate savings. A decision was made to call in the green professionals.

William Richardson (Green Element) attended their offices and explained what an EMS (Environmental Management System) is and how it is expected to operate. An effective EMS leads to a standard called the ISO14001 and maps out a framework that a company can follow, providing assurance to employees and external stakeholders that environmental impact is being monitored and improved. The EMS covers waste reduction, energy, water and transport as well as company culture, legislation and office premises and is divided into six phases: environmental policy, planning, implementation & operation, checking and corrective action, management review and continual review.

William then undertook an Initial Environmental Impact Survey, an extremely detailed 60 page report focussing particularly in the case of adam&eveDDB on energy and paper usage as well as transport using graphs and tables giving known comparatives and showing some surprising results. In order to try and involve everybody working in the agency various suggestions were made such as prizes or incentives for individuals or groups following the recommendations, and for those lowering printing rates comparative to their workloads, or the office floor that turns off monitors and lights more often than others. Clearly any environmental project must motivate people but not impinge on their work. The staff themselves had lots of good ideas: ?Digital Christmas Cards, Recycle Batteries, Cycle more, Digitise more, Take Cars away and move bicycles in.

The general feeling within adam&eveDDB was that the staff wanted to do something but were unsure as to what they should be doing; they should be openly led by top management. This was a theme that came up a number of times whilst talking to senior management. A number of the department heads were unsure that adam&eveDDB had a green agenda and staff that did, did not realise that it was led by Stephen Woodford, the then, CEO. There was a general consensus that recycling and energy efficiency was high on the agenda. This firm appeared to be one of the most environmental openly led firms that had been seen in the last few years, which would make changing culture easier and within reach.

Following the Initial Environmental Impact Survey which highlighted the areas in which significant improvements could be made, a series of meetings were held to identify the method of achieving these, and a plan of action was drawn up. William was able offer distinctive proposals and provide information on products, materials and systems which would be helpful in attaining the results that they were looking for. These results were examined every year by William prior to the annual ISO 14001 audit, which is carried out by an independent auditor to ensure that the EMS is followed to the certification.

In April 2013 Green Element were invited to attend the offices on a monthly basis to monitor all aspects of their environmental impacts & to discover any abnormalities. In August there appeared to be an unusually high demand for electricity and they discovered that the newly installed air-conditioning/heating system was actually performing both functions at once and heating the offices which then were being immediately cooled, providing the perfect ambient working temperature ensuring that the problem was undetected for some months. A case of blowing hot and cold.

A Management Sustainability & Energy Analysis was undertaken in September 2013, which produced some good results and contained recommendations for the future. This report analysed utilities consumption, waste reduction & travel each year from 2008. Rail travel increased in 2012 by 114% when compared with 2008 due to environmental policy driving a switch away from road and air transport usage towards the less polluting and energy-intensive travel mode. There was almost 100% reduction in road-based transport usage in 2012 – which is an excellent accomplishment. The energy performance average was a little disappointing because of the air-conditioning unit malfunction, but having been identified, this has now been fixed. Current water consumption levels are better than average. The agency uses an environmental waste service so that no waste produced is sent to landfill, saving 117 tonnes of carbon dioxide equivalent (CO2e) emissions in the year to June 2013 – roughly 85% of adam&eveDDB’s waste is recycled (15% is incinerated), avoiding pollution and costly landfill taxes. Waste production is lower than average when compared with other agencies of the same category and size. The agency have achieved an above average reduction in the paper usage between 2009 and 2012.

Clearly a successful EMS depends on every employee of the company, from cleaners to top management, being involved, and it could be one of the stumbling blocks. Green Element provide the impetus for inspiration to the staff by including key people in every section in the decision-making and implementing process. adam&eveDDB were surprised how easily staff compliance was won over.

Whilst there is no clear evidence to substantiate an increase in business for adam&eveDDB following attaining the ISO14001 standard, it has shown that they themselves are conscious of ‘green’ companies, for example in their choice of a bio-diesel car courier company. Maybe they have been chosen to be a preferred business partner because of their corporate philosophy to climate change issues.

So what has adam&eveDDB saved in the last five years?

That is an impressive total of more than £383,000. Associated costs including management consultant & audit fees and material costs reduce this figure to a net gain of approximately £350,000.

And what might adam&eveDDB save if the ‘business as usual’ scenario is applied?

….. and it’s not only adam&eveDDB that have benefitted financially; they have supported various environmental charities such as World Land Trust, Wateraid, the Cork Oak Programme Morocco, and WWF in recognition of specific savings, and perhaps their achievements make small but significant inroads to returning our world to the paradise where Adam and Eve began.

William Richardson MSc BA (hons) CIWEM AIEMA is the Managing Director of Green Element Ltd. He has been an environmental management consultant since 2007, graduated from the University of Hertfordshire and is a director of the British Kitesports Association, a trustee of the Charity, KiteRight and is the current Chairman of the Chartered Institute of Water and Environmental Management – Metropolitan Branch. For a full Bio visit here. 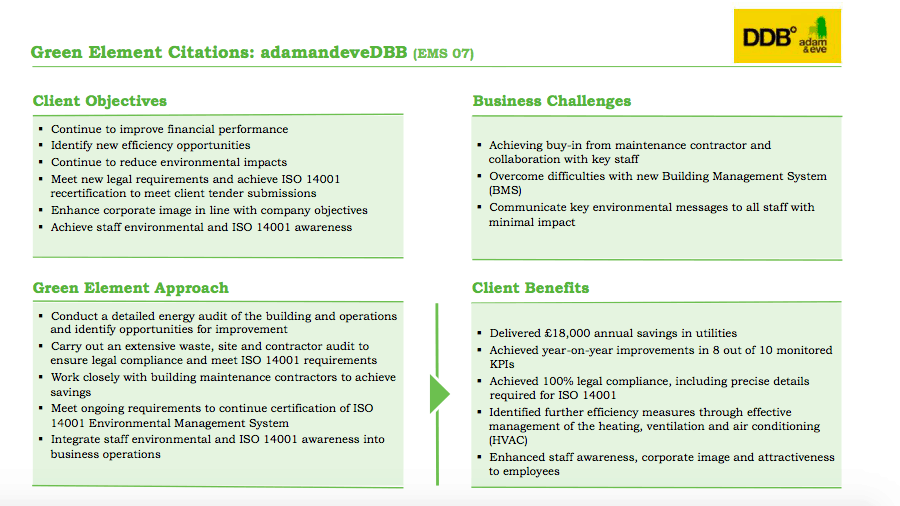