While at university, the idea of buying a van, converting it into a campervan and driving 10,000 miles around Europe was simply a dream for myself and a friend. For any young graduate money is always tight. So for this trip to be possible, we had to be as conservative as possible, while still enjoying ourselves of course. Almost all young travellers that embark on a trip around Europe, will do so through purchasing an InterRail pass. However, not only does this limit you on where you can travel and when you can travel, but is actually very expensive. While from an environmental perspective driving is not the preferable mode of transport, with around 35 million licence holders in the UK, people will be using their cars for many years to come. However, by learning to drive efficiently, masses of fuel can still be saved. With this in mind, we believed that if done right, travelling and sleeping in a van would be a viable option. So we decided to purchase a diesel Ford Transit and fit it with two beds, storage and a cooking area. 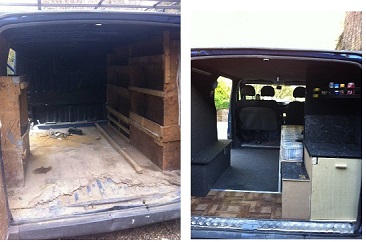 We knew we would unavoidably rack up CO2 emissions, as well as cost, but being two Geography graduates, we set out to be as efficient as possible. Consequently, we did some research and calculations beforehand to see how much fuel we could save. Since motorway driving was a large part of our trip we knew that this was where the most savings could be made. Studies have shown that driving at 70mph uses up to 9% more fuel than driving at 60mph and up to 15% more than at 50mph. At 80mph up to 25% more fuel is used than driving at 70mph. The thought that the UK Government almost raised the national speed limit to 80mph now seems even more bizarre. It was estimated that this increase would cost society an extra £766m in fuel bills a year, £62m in health costs and 2.2m tonnes of carbon emissions.

In addition to reducing our speed, we also avoided heavy breaking and rapid accelerating as this can potentially save as much as 30% on fuel. As well as driving more efficiently we also looked at other means of increasing efficiency. For example, keeping the tyres inflated at the correct level, as driving on soft tyres can increase the fuel bill by up to 2%. We also avoided traffic wherever possible by doing almost all of the driving between rush hour periods. The use of air conditioning was another aspect to be limited as it can use up to 25% more fuel. Instead, if it got too hot we would simply have the windows down. Having said this, when we got to southern Spain and it reached 45°C, having the windows down didn’t quite cut it. Interestingly, if we were to drive above 60mph it would actually be more efficient to drive with the windows up and the air conditioning on, due to the increased drag on the vehicle.

Making sure the van was fully serviced before we set off and checks were made along the way was extremely important. Inefficient, under-serviced engines can reduce fuel economy by 10% or more. We weren’t motor mechanics but just regularly changing the oil and making sure the fuel cap was on tight can make a real difference. Finally, we knew roughly every 50kg will increase our consumption by 2% so we minimised what we took and removed unnecessary items such as the roof rack the van came with.

So what difference did all this make? Well, I remember one particular journey we filled our 80 litre tank to the brim in Bratislava, Slovakia. We then drove 615 miles, stopping at Siofok, Hungary, then into Croatia through Zagreb, Spilt and finally down to Dubrovnik before needing to fill up. This works out to be an average of 35 miles per gallon costing us, at an average of £1.08 per litre, £86. Contrastingly, we did a similar length journey at the end of our trip. This time however, due to having one day to drive the length of France to make our pre-booked ferry, we were forced to drive far less efficiently. We travelled from Valcabrère in the South of France, 666 miles north to Calais and had to fill up the tank twice. Thus, we could estimate that around double the amount of fuel was used; 160 litres. This equates to 19 miles per gallon and cost us £172, assuming the same price of diesel.

Overall, driving efficiently over 115 days for much of the 10,000 miles cost us £1481 and produced around 3566KgCO2. An InterRail ticket would have cost us around £1300 each, not including accommodation. However, if we had driven how we did in our last 666 miles for the entire 10,000 miles it would have cost us £2584 and 6224KgCO2. So by having a little discipline we managed to save £1103 and 2658KgCO2. That’s the equivalent to 367 pints of beer and a 13 watt light bulb being lit for 23 years, respectively. These savings made along the way funded what was most definitely a trip of a lifetime. So next time you’re about to switch to the fast lane, think about the planet…and your wallet.